Fashion in the early and high medieval period is quite simple. The pattern pieces are mostly made from squares and triangels. Today I will present a simple pattern for a dress that can be used for the 13th and beginning of the 14th century. I wil also give some ideas for the common variation were the sleeves are only attached on the shoulder or were the sleeves are wide and short. The basic pattern is probably usable for earlier periods as well. For my pattern I used a couple of extant garments, illuminations from period manuscripts and statues from the 13th century.

One of the most influential manuscripts in the 13th century is of course the Morgan picture bible1. I would advice to check the digital edition of this manuscript. The details are exceptional! In the image below the lower section of fol. 17r can be seen and it shows 5 women (the three on the left are shown again in the part right of the tree) wearing very similar dresses. The drape is already wide at the chest and waist and the sleeve is rather tight around the underarm. This trend is seen all around the 13th century in different manuscripts. 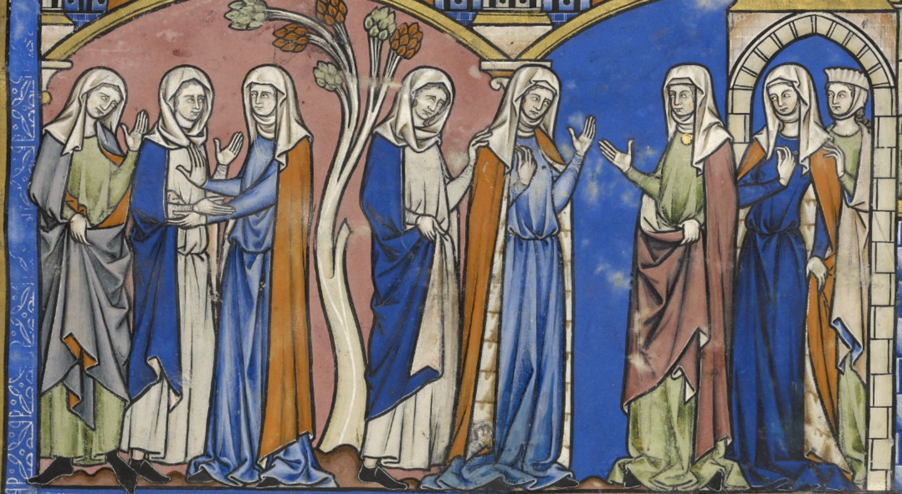 There are as far as I know no complete dresses from the 13th century that survived for the western European world. Extant garments that do give insight of construction and patterns are the tunic of saint Louis that luckily survived the fire of the Notre Dame in Paris, the dress of saint Clara of Assisi, the tunic of Saint Francis of Assisi and all of the Herjolsfnes dresses2. All of these garments show similar simple constructions with a bit of variations in the gores and gussets.

This all led to the following pattern consisting of a front and back piece, two sleeve pieces, at least 4 side gores, optional front and back gores and gussets under the armpits. The width and amount of gores depends on the richness of the person that will wear the dress. The richer the more fabric would be used. For the 13th century look you should make the sleeves tighter fitting on the underarm. A small row of buttons (max 5 per sleeve) is also possible.

Two common variations of the sleeves are the wide short sleeves and the sleeves that are not fully sewed on, but only on the top of the shoulder. For both the body part of the dress remains the same.

I will expand on these variations in another blog post but here is a short indication in what to change in the pattern.

The adjustment to the pattern for a dress with loose sleeves it is better to sew the sleeves on when the body is completely sewn together. The sleeves are then sewed on from on the top of the arm hole.